Why do women so rarely make it into senior positions when our data says women could be more effective leaders of professional service firms than men?

The recent appointment of Georgia Dawson as the new senior partner at Freshfields Bruckhaus Deringer generated a lot of attention, given the near uniqueness of a women heading up either a magic circle law firm or a Big Four accounting firm. And, while it is not as near a unique occurrence, it remains rare for women to be appointed to other senior positions. Given this reality, our assertion about the leadership capability of men and women is especially relevant and, critically, it can not be passed off as opinion as it might have been in the past.

So, why can’t our assertion be passed off as opinion? The answer is easy: for the first time we have real and robust data to support the assertion. The data comes from the 360 Rob and his co-authors (Tom DeLong and Jack Gabarro) created from the leadership model in their book, When Professionals Have To Lead. The model, which is shown below, has four meta-competencies, Direction, Commitment, Execution and Personal Example, and eighteen sub-competencies. The 360 has 67 different behaviours, which are used to establish the mean ratings for the individual behaviours as well as the meta and sub-competencies.

Figure i: Visual schematic of the integrated leadership model devised by John Gabarro and Robert Lees, excerpt from When Professionals Have to Lead: A New Model for high Performance p38 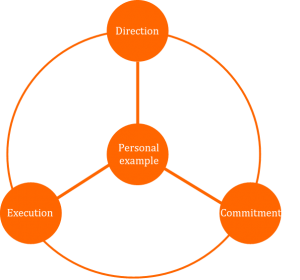 The 360 currently has 10,200 datapoints and been subject to a rigorous psychometric assessment to ensure its construct reliability. Consequently, our opening assertion isn’t simply our opinion, it is generated from the data analysis, which made it clear that, in the key leadership behaviours, women are consistently rated more highly than men.

These results illustrate that women partners are rated more highly than their male counterparts for the majority of the behaviours that relate to gaining commitment to their practice/service line or team’s strategy, and building and developing effective teams to ensure its delivery. Their male partners are seen to be more effective at setting a clear direction and committing to market leadership.

These results are very similar to the results of the full psychometric analysis we conducted when there were 8,000 data points. In that analysis, women partners were also rated more highly with regard to setting a strong personal example, the ability to gain commitment and their focus on execution than their male peers.

We have, however, seen a number of rating changes in our current analysis compared to our 8,000 datapoint study, with male partners now being ranked above their women counterparts in the sub-components Enhances The Group’s Reputation, Unswerving Commitment To Market Leadership and Demonstrates Passion And Belief.

Women In Senior Positions – Or Not

Given the 10,200 data points, the leadership capabilities of women partners versus their male counterparts is likely to be the reality in a lot, if not the majority, of firms. Consequently, we have to ask why is it that women partners do not typically become practice group or service line heads, office or regional managing partners or in charge of major client relationships at anything like the rate of their male colleagues. This is despite many firms putting into place programmes focussed on speeding women through the firm. These programmes, which typically include mentoring by senior partners, support from an external coach, exposure to important clients and involvement in high profile firm-wide leadership initiatives, clearly help but the evidence is clear – on their own, they are not enough.

You Have To Change The Culture

There are a myriad of reasons why programmes focussed solely on women do not drive the necessary culture change and our thirty years of working with and in some of the major professional firms around the world, has given us what we believe is a unique insight into why.

The Issues That Need To Be Dealt With

The reason for the inconsistent success of women’s initiatives that we have heard referred to most often (and, in fact, many firms have invested a sizeable proportion of their training and development budget on it) is unconscious bias; however, we consider this to be an overly-simple explanation and one which comes nowhere near addressing the complexity of the issues that need to be resolved. Unconscious Bias training is just like the individual elements of the women’s initiative – it is focused on the individual and does not form part of an holistic programme of initiatives designed to change the totality of the firm’s operations.

In our view, a good starting point is the perception of success – the firms, themselves, are perceived to be successful and being a professional brings with it status in the commercial and public arenas. All of which makes the argument surrounding the need to change the way firms do things, to many, spurious. This is especially true in the top tier law and accounting firms, whose partners are extremely well rewarded and who enjoy the status that goes with it.

Changing culture means focusing on process, which is difficult for professionals used to working with an essentially black and white body of knowledge. Working with process entails working with the non-specific, with opinions and individual behaviour, all of which are typically outside of a professional’s experience and preference.

Creating a compelling picture of what the changed firm will look like, alongside how things will get done in the future, and how the changes will impact individuals is absolutely critical to the success of any change initiative. In some firms, the reality will be that a lot of senior/executive positions are filled by men, who aren’t interested in challenging the status quo. The impact on these individuals and their powerbases needs to be very carefully assessed. As does the impact on anyone holding a position that, in their eyes, provides additional status beyond simply being a partner. You have to know who will see themselves gaining and, critically, who will see themselves losing. That judgement demands an understanding of consequence, which means weighing up potential responses to decisions and actions, something that professionals, used to working with their body of knowledge and the structure that brings, are not especially good at.

Other considerations that need to be addressed include the fact that professionals do not like to give bad news or engage in conversations, which might bring ‘the personal’ into play; consequently, conversations surrounding repositioning what an individual does or the position they hold are typically not carried out well. This avoidance of the personal is especially true when it comes to conversations between partners. So, individuals rarely know what they are doing well or badly in other people’s eyes and so are unlikely to know why they need to change. This uncomfortableness with the personal is likely to be further exacerbated in any debate associated the meritocratic movement of people as, until the 360, there has never been any robust mechanism to compare the different capabilities of male and female partners.

Help The People Who Want To Change

There are always some people who would like to change the status quo. Their problem, and one we encounter all the time in professional firms, is that they don’t know how. Professionals’ raison d’etre is to serve clients, to do outstanding client work and professional firms are, too often, not the best examples of well-run organisations. The ‘don’t know how to’ was brought home to us not only when we worked in firms but when we were consulting. Rob, in particular, kept coming across this reality when, undoubtedly because he was a co-author of When Professionals Have To Lead, he was frequently asked to go and talk to senior partners, who had attended HBS’ ‘Leading Professional Service Firms’ programme. To a man (and it was always men), they eulogised over their experience (the content, the networks and the location), but, also to a man, they admitted that they were struggling to translate the content into actions they could take to improve their firm’s operations.

You Have To Understand The Context

We can hear voices of disapproval that we haven’t mentioned clients in our discussion around change. So, let’s be clear – change has to be in context. And, that context is the market for clients and the market for people. And, no firm competes in a vacuum. The changes you make to create a culture of gender equality will have an inevitable impact in both of these markets and draw responses from your competitors. All of which makes timing critical; knowing when to take action and when to hold fire, both internally and externally, are some of the key judgements that firms have to make to ensure competitive success.

Two Very Clear Challenges: Changing The Culture To A True Meritocracy And Making Every Partner An Effective Leader

The data from the 360 on gender and leadership, per se, present professional service firms with two very clear challenges. One is to move women into and through the partnership much more successfully, and the other to create a cadre of effective leaders regardless of gender. Yes, women tend to make more effective leaders than their male counterparts, but neither is as effective as they could be.

The second challenge is easier than the first as there some clearly established routes, that we know work in enhancing partners’ leadership capability. Leadership is learnable skill, but people have to know which behaviours make them into more effective leaders. So, every firm needs a model (similar to the one Rob and his co-authors created), which resonates and is accepted by the partners. Our experience is that, while some partners will respond quickly and effectively to the behavioural challenge, most will require help. The help could come in the form of coaching from colleagues or an external coach, mentoring from a colleague who is an effective leader or attending development programmes (remembering that the application of any learning is key). Using a tool like a 360 should always be a part of enhancing people’s leadership capability as long as it has an appropriate data set, which can be used for both comparative analysis and measuring progress.

While both challenges are clearly intertwined, the first challenge of changing a firm’s way of working across all of its operations and processes is by far the most difficult; however, the reality is that for women to really be on a truly equal footing with their male colleagues requires a truly meritocratic culture. Hopefully, the discussion on potential current realities will help firms understand the issues they may be facing and help them initiate a compelling view of the future which will drive the necessary changes. And, in doing so, start to utilise the talents of all of their people much more effectively. Firms in which everyone can flourish and achieve their full potential will, we believe, be the ones that win the top clients and the ones the top candidates want to join. Creating a truly meritocratic culture is, simply, a no-brainer.

Rob Lees is a co-author of the best-selling When Professionals Have to Lead. He is a former global consultant advising professional services firms on improving individual, team, and firm capability.

Liz Baltesz is an independent consultant with a special interest in the relationship between culture and leadership.  She is currently researching how people’s perceptions and expectations of culture have changed during lockdown.

Dr Henry Marsden is the Managing Partner of PSFI. He works closely with leaders of law, accounting, consulting and investment banks on development initiatives that improve performance in challenging markets.

When Professionals Have To Lead is published by Harvard Business School Press, Boston, Mass, 2007

Business Owl for the design and creation of this website